We have just published a new paper in  Computers, Environment and Urban Systems entitled “Linking Cyber and Physical Spaces Through Community Detection And Clustering in Social Media Feeds“. In the paper we explore how geosocial media is providing us with  a new social communication avenue and a novel source of geosocial information.
In particular, we discuss the notion of physical presence within social media and its importance for exploring the relation between the cyber and the physical domains. We discuss how communities and groups can be detected in both the cyber and physical space, and how they can be processed to form a ‘hybrid’ geosocial view of communities using social network analysis, community detection (the Louvain method) and DenStream. To showcase these concepts and their benefits, we present the analysis of two case studies that make use of Twitter data associated with two different types of events: a planned activity during the Occupy Wall Street (OWS) Day of Action (November 17th, 2011), and the response to the Boston Marathon Bombing (April 15, 2013). We conclude with a summary and outlook. Below is the abstract of the paper:

Over the last decade we have witnessed a significant growth in the use of social media. Interactions within their context lead to the establishment of groups that function at the intersection of the physical and cyber spaces, and as such represent hybrid communities. Gaining a better understanding of how information flows in these hybrid communities is a substantial scientific challenge with significant implications on our ability to better harness crowd-contributed content. This paper addresses this challenge by studying how information propagates and evolves over time at the intersection of the physical and cyber spaces. By analyzing the spatial footprint, social network structure, and content in both physical and cyber spaces we advance our understanding of the information propagation mechanisms in social media. The utility of this approach is demonstrated in two real-world case studies, the first reflecting a planned event (the Occupy Wall Street – OWS – movement’s Day of Action in November 2011), and the second reflecting an unexpected disaster (the Boston Marathon bombing in April 2013). Our findings highlight the intricate nature of the propagation and evolution of information both within and across cyber and physical spaces, as well as the role of hybrid networks in the exchange of information between these spaces.

Below are some of the images from the paper. Specifically the first image is how one can think of the relationships between physical and cyber spaces.  The next image provides an overview Our geosocial analysis framework for examining cyber and physical communities.

In the figure below we show an example of using DenStream for spatiotemporal clustering and how the process can capture the protest activities that were planned for the Occupy Wall Street movement’s Day of Action. Each dot corresponds to the originating location of a geolocated tweet; The color of each point indicates the time of the corresponding tweet, ranging from dark blue (early morning, 0) to dark red (late night, 1). While the circles represent a specific spatiotemporal cluster. For example the circle labeled A marked the start of the day where people congregated around Wall Street while circle labeled C shows a cluster at Foley Square.

While in the figure below we show one example of linking the cyber and physical communities. Specifically in (a), the top five communities (node degree > 100) in the cyber space retweet network (each community is designated by one color) are shown; (b) shows the physical space groups; and (c) shows the resulting  hybrid meta-network where the connections between physical groups (P nodes), and cyber space communities (C nodes) are shown. 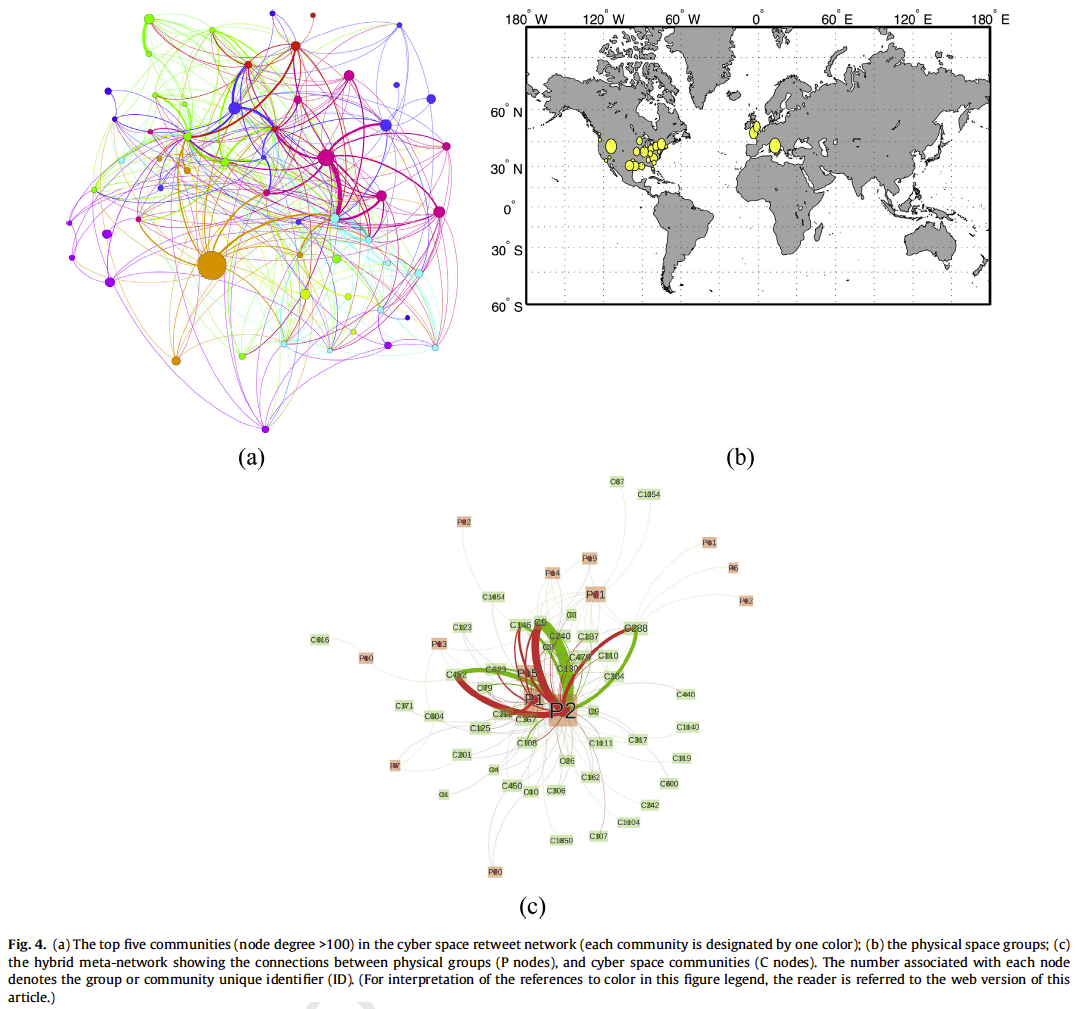 We hope you enjoy the paper.